Cellotronicum – recital for cello and multimedia

Contemporary musical works and creative performances. A synthesis of art and state-of-the-art technology. The project, intended to inspire music for cello solo and electronic media, has been attracting outstanding Polish composers who use computer technology in their works, which demonstrate a whole range of sonic capabilities of an electronically enhanced cello. The initiative is being continued in order to expand the Polish repertoire for cello and audiovisual media. Cellotronicum II presented at the 2006 Warsaw Autumn won the Orpheus prize. 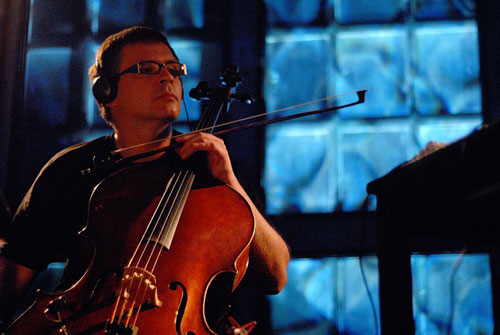 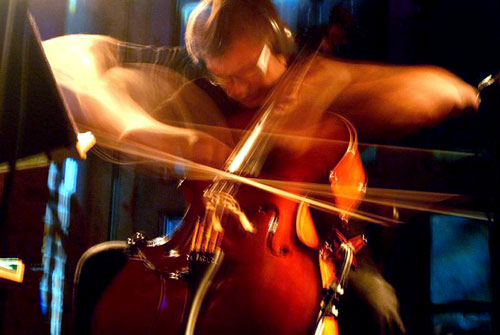 “Among the themed presentations at this year’s Festival I also recall one evening with particular intensity. It was Andrzej Bauer’s premiere recital (23 September) in a packed Laboratorium Hall at the Centre for Contemporary Art. This outstanding cellist had commissioned new compositions from Stanisław Krupowicz, Michal Talma-Sutt, Paweł Mykietyn and Jacek Grudzień, also adding to the programme Karen Tanaka’s wonderfully lyrical Song of Songs. (…)  Thanks to a work we heard later, I include Bauer’s concert among the most important artistic events of the year. Michal Talma-Sutt had already caught my attention during last year’s Warsaw Autumn festival when his electro-acoustic composition Light and Shade had shown him to be an artist with an inventive sound language and excellent formal technique.

Written for Andrzej Bauer, Cellotronicum is a half-hour pageant of ideas designed for an instrument interacting with a computer. The soloist elicits from the cello all kinds of sound this instrument is capable of producing, and the computer processes them, adding successive layers to the musical structure. Seemingly nothing new – yet the composer succeeds in creating something rare: a fusion of both parts, a union so strong that the listener has the impression of hearing one instrument. Thus, this is not ‘cello with accompaniment’ but indeed ‘cellotronicum’.

Moreover, the electro-acoustic sound layers used by Talma-Sutt are unparalleled; some are thrilling, some sparkle with unusual colours, some seem to have tangible textures – rough then again smooth; others are warm or calculatingly cold, razor-sharp and overpowering. All this in a lengthy work which on second hearing (since a string broke halfway through, it was necessary to start again) was not boring; on the contrary – it was engaging and entrancing.

After the interval, Andrzej Bauer calmed us down with a composition by Karen Tanaka, followed by two aesthetically different works, the first of which was A Page from an Album by Paweł Mykietyn. I am very fond of this composer’s music and appreciate his treatment of the present with musical symbols, his conceptual associations constructed from sometimes trivial material and his constant search for values in a world of plastic equipment, clothes, feelings and outlooks. Mykietyn does not dismiss the world of today; after all, he lives in it – whether he likes it or not. However, he shows its terrifying indifference, and then, painstakingly moulding a lyrical melody from fragmented elements, he raises the emotional temperature to a level close to late-Romantic rhetoric. Mykietyn – a Romantic, you might ask? I think so – in spite of everything. In spite of a world that gives us colourful building blocks which cannot be assembled into any coherent whole. This music reminds me of the painful central emptiness evoked by theatrical means in a production of Sarah Kane’s Psychosis 4.48 at Warsaw’s Rozmaitości Theatre. In A Page from an Album I was slightly disturbed only by the closing gesture of a child’s top toy set into motion by the soloist – was it a piece of added kitsch or a metaphor explained with the aid of a simpler one? Or perhaps an attempt to keep a healthy distance from one’s own work, with a wink and a nudge?

An impressive finale to Andrzej Bauer’s recital was provided by Jacek Grudzień’s Ad Naan, a musical work of ‘rock’ expression, striking, conveying a message and showing a fragment of contemporary culture in, I would say, a journalistic manner. Andrzej Bauer used the commissioned works to put together a programme that was coherent, profound, engaging as well as virtuosic, suitable for performance in concert halls throughout the world. And although – as I am told by people who unlike myself attended all the ‘solo + computer’ concerts – other recitals failed to elicit equally positive reactions, for that evening alone the undertaking was worth the effort.”

“Andrzej Bauer’s evening recital in the Laboratorium Hall of Warsaw’s Centre for Contemporary Art was remarkable. Sitting behind transparent soundproof glass and lit by a single spotlight, he performed works for cello and computer written especially for him. In Partita by Stanislaw Krupowicz (b.1952), a piece rooted in the Baroque model of the genre, the most important and the most interesting element seemed to be the battle between the notated live sound of the cello and the pre-recorded computer material. Cellotronicum by Michal Talma-Sutt’s (b. 1969) might be too rich in musical events; however, having to listen to the piece almost twice (a string broke halfway through), the listeners were able to take a close look at the work’s conceptual structure without being bored. Finally, Pawel Mykietyn’s excellent three-movement A Page from an Album, taking place in a dreamy space of childhood scenes separated by the sound of a musical box. The first movement consisted of expressive several-note motifs in the cello part subjected to electronic repetition (this echo was somewhat ominous, as if this particular page from the album was not altogether genial); in the second movement the ‘live’ instrument had difficulty being heard against the distorted expanse of an operatic human voice; the third one consisted of a beautifully warm melody in the cello part against a background of falling motifs. The piece ended with Bauer activating a spinning top toy.” 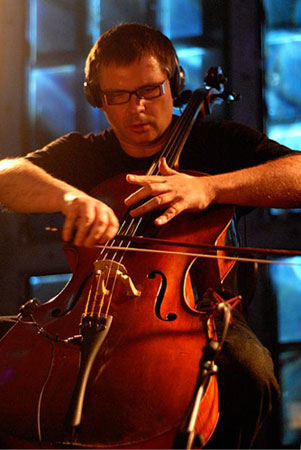 “Among presentations of varying quality in the cycle of solo performances with electronic amplification, the performance that stood out was that of Andrzej Bauer whose mastery of the cello went hand in hand with interesting and often beautiful music. Bauer played four Polish pieces inspired by him. The most charming among them was Pawel Mykietyn’s A Page from an Album. (…) At last someone has managed to give a human dimension to music dominated by electronic sound.”